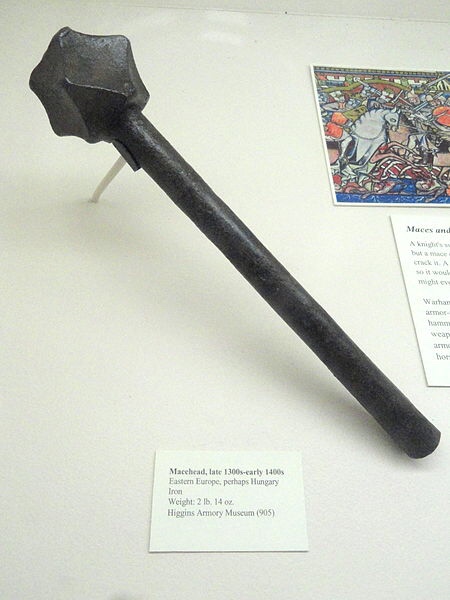 Maces, or as they were otherwise known, bludgeons, became extremely popular in the Middle Ages in Eastern Europe, where the poorer soldiers could arm themselves cheaply with an easy-to-produce weapon with deadly potential.

They were brutal devices, and nowadays would be considered a terrible weapon, causing an awful way to die. But in Medieval Times, bludgeons were among the holiest of Weapons. As the victim would shed no blood, technically killing was not a sin. Therefore clubs and blunt weapons were used frequently by religious figures, and often monks were drafted into the military.

Cavalry quickly adopted the mace, as it was great for knocking an opponent of balance when the oppressor was riding at speed. A mace-bearer would require little training, but great strength. Naturally the weight of the mace-head would make it a dangerous weapon, but with force, it could inflict extreme injuries. Target and force training was the most popular for bludgeons.

Maces were often given modifications so that they could be made even more deadly. Most maces were simply a metal ball attached by a socket to a wooden stick. Usually there would be a leather or rope grip. However, many bludgeons were given sharp spikes to help with puncturing heavy armour.

The many varieties of maces include war hammers, flails, morning stars, etc.

THANKS FOR READING! LET ME KNOW WHAT YOU

THINK… IN THE COMMENTS BELOW!